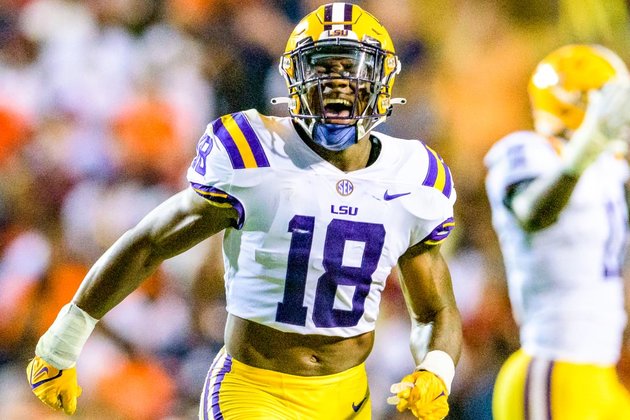 How Damone Clark's Approach Will Help His Rehab

FRISCO, Texas - Damone Clark isn't much interested in how this story started, only how it ends.

It's only natural to sympathize with his situation. A second-team All-American in 2021, Clark was seen by most as one of the better linebackers in this draft class. The LSU linebacker was widely believed to be a Top 100 prospect - right up until an offseason neck surgery pushed him down draft boards, all the way to the Cowboys and their 176th overall pick.

However disappointing that might have been in the moment, that moment is over. It's clear from talking to Clark that his focus is on what happens now that he's secured an opportunity.

That attitude is part of what drew the Cowboys to Clark. The Baton Rouge, La., native played 50 games across four years at hometown LSU. Over the final two years of that career, he was awarded the program's prestigious No. 18 jersey, given to a player with a track record of success on the field, as well as "a selfless attitude that has become the epitome of being an LSU football player."

Having initially met with him at the Senior Bowl in January, Cowboys executive vice president of player personnel Will McClay said that attitude shined through.

"When you sat down and talked to him, he was all business, he was all about ball," McClay said. "He wore that number at LSU for a reason, and you got that feeling when you met with him."

Clark was the 16th player to wear that number since LSU started the tradition back in 2004, and several of those have gone on to extend that success into the NFL.

"The other guy that wore it for two years before me was Tre'Davious White, so it's great company to have," Clark said.

The obvious drawback is that the Cowboys will have a bit of a wait to see Clark bring that attitude to the field. He underwent surgery at the end of March, and the recovery time is estimated at about six months. Though it's interesting to note that Cowboys officials have expressed optimism he could be available at some point during the 2022 season.

"I feel good about this guy and how he's going to go about his business and how much he loves the game," said chief operating officer Stephen Jones. "I really think we have our hands around this, and this guy is one hell of a football player when he's healthy, and I think he will be healthy."

If that's the case, it'll be nothing short of a steal. The Cowboys confirmed after the draft that they had Clark graded in the third round prior to his surgery. It's certainly plausible that someone may have drafted him even earlier than that, had he been healthy.

On the plus side, Clark is putting that natural demeanor to use in his recovery, which can only be a good thing for him and the Cowboys.

With that approach in mind, it's no wonder Clark is focused on what the future holds - and why the Cowboys were comfortable betting on him.