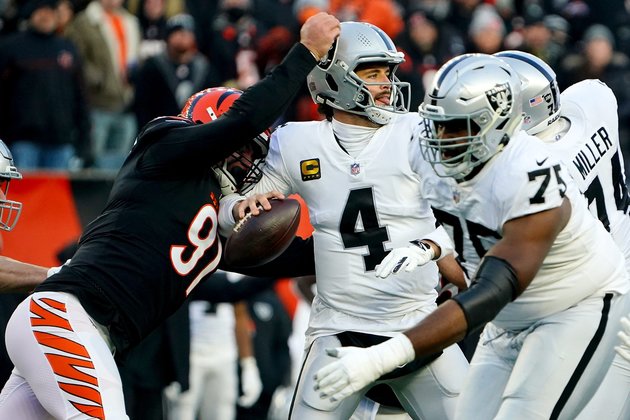 Hendrickson was injured during the third quarter of Saturday's 26-19 victory over the Las Vegas Raiders.

Taylor said Hendrickson will need to complete the team's concussion process before he could be cleared to play in next weekend's divisional playoff round.

"It's really a daily thing, the process will start on Tuesday him getting cleared and then he's got to do physical activities and get back to contact practice," Taylor said. "There's certainly enough time in the week to get that done if he's feeling up to it and clear day-to-day."

Hendrickson had a key sack and forced fumble on Raiders quarterback Derek Carr to set up a Cincinnati field goal on Saturday.

In the regular season, the 27-year-old Hendrickson racked up 14 sacks, which ranked fifth in the NFL, while earning his first Pro Bowl selection. His career-best total topped the 13.5 he had in 2020 for the New Orleans Saints.

Defensive tackle Mike Daniels (groin) was injured and will likely sit out next week.

Taylor said there was "a chance" defensive tackle Josh Tupou could return. He missed the game against the Raiders with a knee injury.