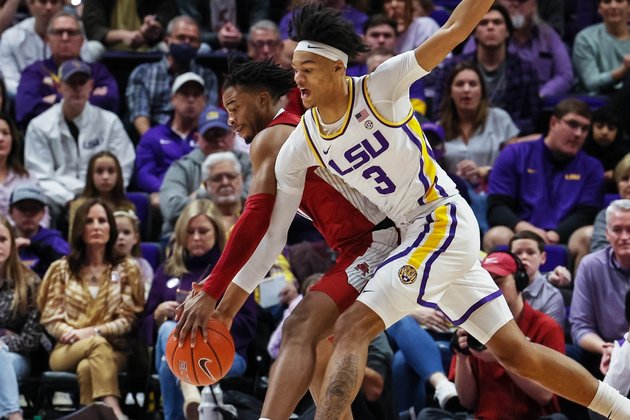 Arkansas upsets No. 12 LSU with strong defense late in game

JD Notae scored 19 points and contributed to a stifling defensive performance late in the game as visiting Arkansas pulled off a 65-58 upset of No. 12 LSU on Saturday at Baton Rouge, La.

Eric Gaines scored 14 points, while Tari Eason and Alex Fudge scored 13 each to lead the Tigers. Second-leading scorer Darius Days, who entered with an average of 14.7 points per game for the Tigers, had three points on 1-of-8 shooting from the field.

Musselman is expected to miss at least one more game. The Razorbacks will face South Carolina on Tuesday at Fayetteville, Ark.

Notae scored the Razorbacks' first five points of the second half to give them a 36-35 lead. Back-to-back 3-pointers by Efton Reid and Gaines gave LSU a 41-36 lead with 17:10 remaining.

Stanley Umude made a 3-pointer for the Razorbacks before Days got his first points of the game of a layup that gave LSU a 43-39 lead with 15:22 to play.

Arkansas tied the score twice before Eason scored four points to help the Tigers take a 56-48 lead with 9:01 remaining before their offense went cold.

Williams' 3-pointer broke the tie with 1:14 left, and Stanley Umude added a put-back with 17 seconds left to seal the victory.

The Razorbacks took their first lead 13 minutes into the game at 22-20 on two free throws by Chris Lykes. The score changed hands three times and was tied twice before the Tigers took a 33-31 halftime lead.