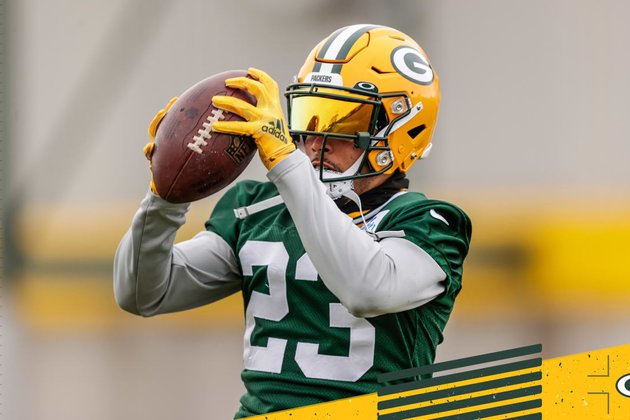 GREEN BAY - Aaron Rodgers' fractured toe is nearly healed, Josh Myers has no reservations with his knee and Za'Darius Smith is practicing again for the first time in four months.

Randall Cobb continues to make progress in his return from a core injury, while Jaire Alexander and Billy Turner are both back after recent activations from the reserve/COVID-19 list.

So, yeah, it's safe to say the top-seeded Packers were feeling pretty good as they stepped back on the practice field Wednesday. With several key players returning to health, there's optimism this first-round playoff bye will do Green Bay's roster good as it readies for next week's NFC Divisional playoffs.

"Health-wise, man, this is amazing," said Rodgers after practice. "To be out at practice and see '55' running around and see '18' running around and '23' out there, '77,' you know, like, whew. Feels pretty good having these guys back. The excitement level definitely goes up and the energy is right where it needs to be."

The Packers have battled injuries since the start of training camp. Their six returning Pro Bowlers from 2020 - Rodgers, receiver Davante Adams, Smith, Alexander, left tackle David Bakhtiari and Elgton Jenkins - have missed a combined 58 games this season. Of that group, however, only Jenkins has been lost for the duration of the season.

Rodgers, who played through a fractured pinkie toe for two months but didn't miss any games, reported no setbacks coming out of last Sunday's regular-season finale in Detroit.

In fact, the reigning MVP feels the toe finally could be "100%" by next weekend. Rodgers isn't alone in that regard. His starting center, Myers, also came out of the Lions game no worse for wear after playing 32 offensive snaps in the first half.

It was the rookie second-round pick's first game back after missing 10 contests due to a knee injury he suffered four snaps into the Packers' Week 6 matchup in Chicago.

Myers felt there was a possibility he'd return this year but the waiting was arduous, especially considering he'd never really missed time due to an injury. As tough as they come, Myers suffered turf toe midway through his final year at Ohio State but still finished the season.

"Mentally, it definitely took a toll. That was really hard," Myers said. "That was a new experience for me and something I had to fight through, for sure. It was hard physically, too. It hurt. It was a struggle to get back, but that's just kind of part of it. You accept that part of it. The mental side of it was tough."

Myers said he came through the game, though, and was grateful to get the snaps with Rodgers and the starting offense. It not only allowed him to get back into a groove again but also refamiliarized him with his quarterback's cadence.

Meanwhile, the Packers gave left tackle David Bakhtiari a day off on Wednesday. It was a precautionary measure the team took after the five-time All-Pro's 27-snap season debut in Detroit, which marked Bakhtiari's the first in-game action in 378 days.

Receiver Marquez Valdes-Scantling (back) and defensive lineman Kingsley Keke (illness) also didn't practice but otherwise Green Bay had the rest of its roster on the field.

Running back Aaron Jones (knee) and linebacker De'Vondre Campbell (elbow) were both back after taking the Lions game off. Special-teams stalwart Ty Summers also practiced for the first time since going on injured reserve last month with a hamstring injury.

However, the most eyes were on the returning Smith Wednesday. The two-time Pro Bowl linebacker played 16 snaps in Green Bay's regular-season opener against New Orleans before landing on IR with a back issue for the past four months.

If he continues to make strides, the 29-year-old Smith could be a key rotational pass-rusher alongside Preston Smith and Rashan Gary down the final stretch of the season. The team is hopeful to also get Alexander, Cobb and Turner back in the fold, as well.

In their stars' absence, the Packers have had rookies and veterans alike step up during their 13-4 campaign. Along with Campbell, cornerback Rasul Douglas, tackle Dennis Kelly and returner David Moore all came out of nowhere to make contributions. Former All-Pro pass rusher Whitney Mercilus also was added before suffering a biceps injury. Coincidentally, he returned to practice Thursday.

With injuries and illness subsiding, the Packers are keeping their fingers crossed for the return of their primary playmakers during a pivotal playoff push.