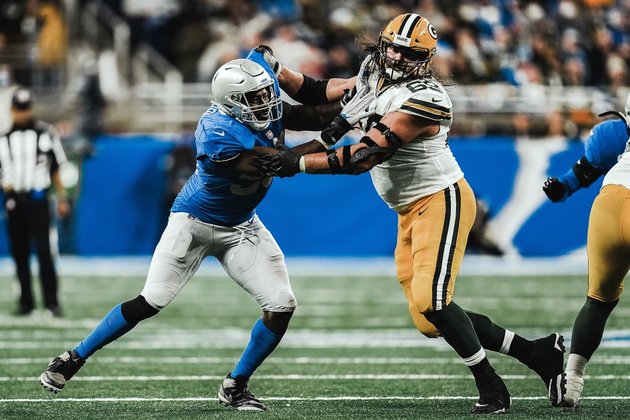 TWENTYMAN: A look at the Lions' 34 free agents

Twentyman: Anzalone started 14 games and was a steady fixture in the middle of Detroit's defense until a late-season shoulder injury ended his year prematurely. Anzalone signed with Detroit after playing his first four seasons in New Orleans in Aaron Glenn's defense. He was a great mentor for young linebackers line Derrick Barnes, and he's a Dan Campbell-type guy for his toughness and grit.

Twentyman: Boyle started three games for the injured Jared Goff, the first three starts of his career after spending his first four seasons as a backup in Green Bay. The Lions lost all three of his starts, but Boyle did make steady improvements from start one to three.

Twentyman: Crosby spent the entire season on injured reserve with a back injury that ultimately required surgery. He's played in 38 games with 18 starts over his career in Detroit, but the Lions are pretty talented and deep at tackle.

Twentyman: Hamilton had a very good training camp and had a shot to make the team if not for being placed on injured reserve with an undisclosed injury in the middle of camp. He's a young veteran with seven career starts under his belt.

Twentyman: Sometimes it takes the right scheme fit for a player to reach their full potential. A former first-round pick, Harris was moved from a hand-in-the-dirt defensive end to a stand-up edge rusher in Detroit, and it was a perfect match of scheme and talent. Harris had a career year in 2021 and is definitely a candidate to re-sign with Detroit this offseason.

Twentyman: Heath suffered a season-ending ACL tear in OTAs. He spent the previous four seasons in Houston where he started 16 games and recorded 3.0 sacks.

Twentyman: Hodge was a reserve receiver and special teams contributor this season. He had a breakout game in Seattle Week 17 with five catches for 76 yards. He recorded five tackles on special teams and made a number of nice plays as a gunner.

Twentyman: Marlowe started nine games this season, filling in next to Tracy Walker when the Lions needed safety Will Harris to move to cornerback the second half of the season. Marlowe set career highs for games played, starts and tackles in his sixth season.

Okudah remained close to team during injury rehab, 'hungry' to return in 2022 O'HARA: Lions are looking for players they love, as shown by 2021 draft class KEY QUESTIONS: What is Holmes' priority heading into the offseason?

Twentyman: Raymond got an opportunity to be a full-time receiver for the first time in his five-year career, and he was solid and reliable. His 11.2 yard punt return average was the fourth best in the NFL this year. He's one of those players that can do it all and puts the work in. He was a terrific influence on rookie receiver Amon-Ra St. Brown.

Twentyman: Known more as a special teams ace his first four seasons in Detroit, Reeves-Maybin got an opportunity to play a much bigger role on defense in 2021, and he didn't disappoint. He finished the season calling the plays on defense and became a real leader for Detroit's defense. Even with his increased role on defense, Reeves-Maybin still led the Lions with 10 special teams tackles. He's the kind of versatile player teams love to have on their roster.

Twentyman: Reynolds was a midseason acquisition off the waiver wire and his addition helped give Detroit's passing attack a boost with his ability to stretch the field and make plays down the field. He averaged 16.1 yards per reception in Detroit with a couple touchdowns. His chemistry with Goff was evident right away from the four years they spent in Los Angeles together with the Rams from 2017-20.

Twentyman: Walker ended a strong 2021 season with a 14-tackle performance and game-clinching interception in the season finale victory over Green Bay. Walker reached the 100-tackle mark for the second time in his four-year career. He's a versatile defender, who excelled playing free safety in Glenn's scheme. He has voiced an interest in returning to Detroit because of the scheme and coaching staff.

Twentyman: Williams started all 17 games for Detroit and was a veteran leader in the defensive line room alongside Michael Brockers. He's a solid veteran with 35 career starts under his belt.

2021 stats: Played in one game with no passing stats

Twentyman: Blough was the team's third-string quarterback and backup to Boyle during his three starts. It was a close competition between Blough and Boyle in training camp and preseason, but Boyle ultimately won the job.

Twentyman: When Pro Bowl center Frank Ragnow was lost for the season Week 4, Brown stepped in and filled the void admirably. He's really one of the unsung heroes for the Lions in 2021. Detroit's offensive line didn't skip a beat after Ragnow went down, and that's a real credit to Brown.

Twentyman: The former linebacker turned fullback has become a versatile offensive player in Detroit with his ability to play fullback and tight end. He's also a very good special teams player. He played so well in the fullback role in 2021 he was named an alternate to the Pro Bowl. He was also named the Lions' Walter Payton Man of the Year award nominee this year.

Twentyman: Holden was a reserve tackle who played mostly in Detroit's jumbo package as an extra lineman. He's got a big frame (6-7, 312) with good movement skills and has started nine games over his four-year career with Arizona, Baltimore and Detroit.

Twentyman: Moore had a key interception late in the season finale that helped the Lions secure that victory. He's also a terrific special teams player, finishing tied for second on the team with eight special teams tackles.

Twentyman: Woods came over from Chicago with a reputation as a terrific special teams player, which he was for the Lions too. He also showed some prowess on defense when given the opportunity to play. He's a veteran special teams ace with the ability to play on defense.

Twentyman: Berry has terrific size (6-4, 255) and played in 62 snaps on defense the last five weeks of the season. He's a developmental player in only his second season in the NFL with eight games played.

Twentyman: It's no easy task to come in and try to fill the shoes of a legend like Don Muhlbach, but Daly did a great job this year. He didn't have any major gaffes snapping the ball on punts or field goals and was steady all year.

Twentyman: Elliott was a solid special teams contributor the second half of the season and got a spot start in Denver Week 14, recording five tackles in 51 defensive snaps played. He's a developmental safety with some upside.

Twentyman: Fox has established himself as one of the best punters in the NFL over his first two seasons in the league. He set a new franchise single-season gross punting record with his 49.2 average this season. He finished second in the NFL in punting average and sixth in net average.

Twentyman: A reserve cornerback who was pressed into his most action Week 10 in Pittsburgh, when he played 30 snaps and had two tackles and a forced fumble. He was thrown at five times this year and allowed three receptions for 44 yards. He's got good length at 6-foot-1 and is a developmental player.

Twentyman: A safety turned running back, Igwebuike is a good young player with a high ceiling. He had some fumbling issues late in the season, but his good plays far outweighed his bad, and he should only get better the more exposure he has playing running back.

Twentyman: Kennedy made his biggest impact in the season finale against Green Bay, throwing a 75-yard touchdown pass on a trick play and catching a couple key passes. Kennedy earned a roster spot with a terrific training camp and preseason. He's still a young player with promise.

Twentyman: Kraemer proved to be a valuable reserve player who was pressed into some spot starts due to injury and COVID-19. He played well when given the opportunity and looks to have a bright future.

Twentyman: Played in seven games with a couple starts Weeks 14 and 15. He played in 161 snaps on defense and 46 on special teams with some good production in those opportunities.

Twentyman: Played in 13 games, mostly on special teams, but did get a spot start in Denver Week 14. He was pressed into duty Week 18 vs. Green Bay when Brown left with an ankle injury, but was replaced by Jonah Jackson moving over to center and Kraemer coming in at guard.

Twentyman: A former defensive tackle turned offensive tackle who played a key role upfront for Detroit this year. He started eight games to begin the year at right tackle, and was the key swing tackle in Detroit's jumbo package when he wasn't starting. He's played tackle for only two seasons and still has a ton of upside.

Twentyman: Patterson was signed off the Patriots practice squad midway through the season after Austin Seibert was placed in IR with a hip injury. Patterson made 13 of his 14 field goal attempts on the year and all 16 of his extra point tries. Between Patterson and Seibert (10 of 12 on FGs), the Lions look to have a couple good options at kicker in 2022.

Twentyman: A terrific special teams player all season for Detroit, Pittman finished tied for second on the team with eight special teams tackles. He got some run on defense the final five games of the season and had a season-high five tackles against Atlanta.

Twentyman: Price moved from safety to cornerback to make a couple of spot starts early in the year. He was replaced by Jerry Jacobs after some inconsistencies, and Jacobs took off. He got a little playing time on defense late in the year, but he made his biggest mark all season on special teams, where he was a key contributor.

Twentyman: Wright became the No. 2 tight end in Detroit after replacing Darren Fells after seven games. He was promoted to the top spot when T.J. Hockenson was lost for the year the final five games of the season due to a thumb injury. Wright was mostly a blocker at Notre Dame, but showed some big-play prowess in the passing game down the stretch. An undrafted rookie, the ceiling looks high for Wright. He and Hockenson could be a nice one-two punch at the position next season.