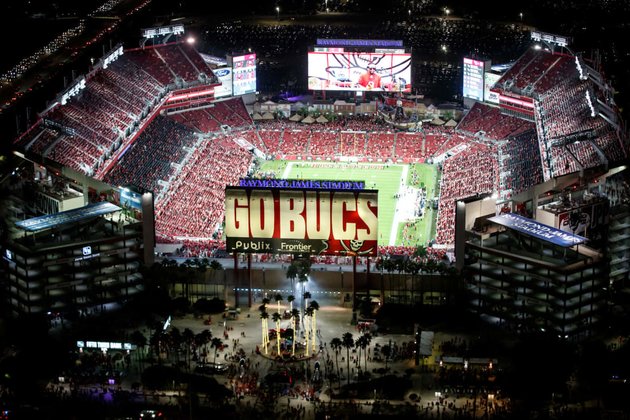 The Buccaneers' Thursday injury report was a bit more meaningful than their first one of Wild Card week because the team held a walk-through in lieu of a full-speed practice on Wednesday. However, there wasn't much change on Thursday in either direction. Two players did get upgraded, as outside linebacker Anthony Nelson (ankle) returned to practice in a limited fashion and wide receiver Mike Evans went from limited on Wednesday to full participation on Thursday. Head Coach Bruce Arians also gave Tom Brady and Steve McLendon the day off.

CLICK HERE for a more thorough look at the Bucs' lengthy injury report.

The Bucs' first injury report of the Wild Card week is long, listing 14 players, and that does not include linebacker Lavonte David or running backs Leonard Fournette and Giovani Bernard because they are all still technically on injured reserve. Bruce Arians had noted earlier in the week that he had some concern about the availability this Sunday of cornerback Jamel Dean due to a hamstring injury, but it appears it will be necessary to keep an eye on cornerback Sean Murphy-Bunting as well. He too is dealing with a hamstring concern, and both corners were listed as questionable on Wednesday's report.

CLICK HERE for a more detailed examination of the Bucs' lengthy injury report.

The Bucs' first practice of Wild Card week was actually more of a walk-through, but Head Coach Bruce Arians said that three players would not have participated in a full-speed workout on Wednesday: wide receiver Cyril Grayson, running back Ronald Jones and outside linebacker Anthony Nelson. Arians indicated that it is doubtful either Grayson or Jones will be back in action in time for Sunday's game but that he had his fingers crossed regarding Nelson's availability.

The Bucs started their week of practice for Sunday's Wild Card game against Philadelphia with some welcome news: inside linebacker Lavonte David and running backs Leonard Fournette and Giovani Bernard were all returning to practice. All three are currently on injured reserve, but now the Bucs have a 21-day window in which they can include them in practice and potentially activate them to the 53-man roster at any time.

CLICK HERE for a closer look at the return to practice of three key Buccaneers.

Outside linebacker Shaquil Barrett was activated from the reserve/COVID-19 list on Tuesday, making him eligible to return to practice with the team on Wednesday. Barrett has missed the last two games with a knee injury suffered in Week 16 but Head Coach Bruce Arians expressed confidence that the Bucs' leading sack producer could return for the start of the playoffs. The Buccaneers will not have CB Richard Sherman for the playoffs, as he was placed on injured reserve on Tuesday.

The Buccaneers used all four of their practice squad protection options to start the Wild Card Week, using two of them on a players they also elevated to play in last week's game, running back Kenjon Barner and tight end Darren Fells. Barner has actually played in each of the Bucs' last three games, filling in as the return man for two contests and getting four carries late in the regular-season finale. The other two protection spots were given to the kicking duo of punter Sterling Hofrichter and placekicker Jose Borregales.

It appears that the Buccaneers will be getting some very valuable reinforcements on the depth chart just as the playoffs begin. On Monday, Head Coach Bruce Arians expressed confidence that running back Leonard Fournette was ready to come off injured reserve and that starting outside linebackers Shaquil Barrett and Jason Pierre-Paul were ready to return after each missed at least the last two games. Arians was less confident in his assessment of Lavonte David's status for the first week of the playoffs and also suggested that the Buccaneers have a new injury concern on defense after cornerback Jamel Dean left the regular season finale on Sunday with a hamstring injury.

"Leonard looks great. He's been working [well], and he should be back. Shaq and JPP should both be back. Lavonte, he will be the one that is the closest [call], but he is starting to move around pretty good, so we'll wait and see. I'm still waiting to hear about Jamel Dean. That's the one that has me concerned from this ballgame. Those guys that are on I.R. and had been out, I expect all of them to be back, maybe Lavonte cannot."

Arians also noted that the hamstring injury suffered by wide receiver Cyril Grayson on Sunday wasn't as bad as originally feared but that Grayson's availability this week would be in question.

The Buccaneers made a round of roster moves on Saturday, the day before their preseason finale against the Carolina Panthers. Wide receiver Cyril Grayson, who has emerged in recent weeks as a key cog in the Bucs' offense, was promoted to the active roster after spending most of the season on the practice squad. In addition, guard Aaron Stinnie is available again after a five-game stint on injured reserve, as he was activated on Saturday.

The Buccaneers also flexed running back Kenjon Barner and tight end Darren Fells up from the practice squad to make them eligible to play against the Panthers.

CLICK HERE for more details on Saturday's roster moves and the players involved.

The Buccaneers placed outside linebacker Shaquil Barrett on the reserve/COVID-19 list on Friday. Barrett is the ninth Buccaneer to go on that list at some point over the last three weeks, though it currently only includes him and practice squad kicker Jose Borregales. Barrett was not expected to play in the regular season finale anyway due to the knee injury he sustained in Week 16.

CLICK HERE for more on Shaquil Barrett and Friday's move.

The Buccaneers' final injury report of Week 18 ruled out five players (as noted below), while eight were given no game-status designation, including Mike Evans, Mike Edwards, Bradley Pinion and Ke'Shawn Vaughn. In the middle were two players who could also miss Sunday's game: center Ryan Jensen, who is questionable with a shoulder injury, and cornerback Richard Sherman, who is doubtful with an Achilles tendon ailment. Jensen practiced in a limited fashion for hte second day in a row on Friday.

CLICK HERE for a more detailed look at the Bucs' final injury report of the week.

As expected, running back Ronald Jones will not play in Sunday's game against Carolina. After Friday's practice and in advance of the day's injury report being released, Head Coach Bruce Arians revealed the five Bucs on the active roster who have been ruled out for the game: Jones, outside linebackers Shaq Barrett and Jason Pierre-Paul, cornerback Rashard Robinson and wide receiver Justin Watson. With Leonard Fournette on injured reserve, the Buccaneers will turn to second-year back Ke'Shawn to take the lead in the backfield on Sunday.

The Buccaneers saw several players on their Week 18 injury report make progress on Thursday. Wide receiver Mike Evans, who was limited for Wednesday's workout was upgraded to a full participant on Day Two, as was rookie wideout Jaelon Darden, who is returning from a two-game stint on the COVID list. Evans missed one game with the hamstring injury he suffered in Week 15 but was able to play 56 snaps last Sunday against the Jets after being limited all week in practice. Center Ryan Jensen also improved from no work on Wednesday to limited participation on Thursday.

CLICK HERE for a more detailed look at the Bucs' long injury report.

Rookie kicker Jose Borregales was placed on the reserve/COVID-19 list on Thursday. Borregales, the 2020 Lou Groza Award winner as the nation's top kicker at the University of Miami, has spent the entire 2021 season on Tampa Bay's practice squad.

The Buccaneers released wide receiver Antonio Brown on Thursday. Brown had left the team shortly after halftime on Sunday in the Bucs' Week 17 game at the New York Jets, and Head Coach Bruce Arians later said that Brown was no longer a Buccaneer. That became official with Thursday's move, which the Bucs accompanied with a statement that noted, in part, that the team had "attempted, multiple times throughout this week, to schedule an evaluation by an outside orthopedic specialist, yet Antonio has not complied."

CLICK HERE for more on the termination of Antonio Brown's contract.

Pro Bowl center Ryan Jensen was one of seven players on the Buccaneers' active roster who did not participate in practice on Wednesday, as he is dealing with a shoulder injury. Jensen has started every game this season and helped Tampa Bay allow the fewest sacks in the league. The others who were held out on Wednesday were Antonio Brown (not injury related - personal), OLB Shaq Barrett (knee), RB Ronald Jones (ankle), OLB Jason Pierre-Paul (shoulder), CB Rashard Robinson (groin) and WR Justin Watson (quadriceps).

CLICK HERE for a more detailed look at the Bucs' first injury report of Week 18.

While RB Ronald Jones was in a walking boot on Wednesday to help with his ankle injury, RB Ke'Shawn Vaughn was deemed "fine" by Head Coach Bruce Arians after he left last Sunday's game in the fourth quarter with a ribs injury. Vaughn, who had a 55-yard touchdown run when the Bucs played the Panthers just two weeks ago, is in line for a much bigger workload in the rematch with Carolina. Leonard Fournette and Giovani Bernard remain on injured reserve - though an activation of Bernard this week is possible - and Jones may not be ready by the weekend.

Guard Aaron Stinnie returned to practice on Wednesday as the Buccaneers began their preparations for the regular-season finale against Carolina. Stinnie was placed on injured reserve on December 1 after suffering a knee injury in his first career regular-season start while filling in for injured left guard Ali Marpet at Indianapolis. The Buccaneers have a 21-day window in which Stinnie can practice with the team without counting against the active roster.

The Buccaneers also activated punter Bradley Pinion from the reserve/COVID-19 list. Pinion was placed on that list on December 31 and was unavailable against the Jets last weekend. He has also been dealing with a right hip injury, which caused him to miss the Bucs' Week 16 contest at Carolina.

Wide receiver Jaelon Darden came off the COVID list on Tuesday after missing two games. Darden had served as the Bucs' primary kick returner for the bulk of his rookie season, with practice squad running back Kenjon Barner taking over those duties in his absence. With Darden's activation, the Buccaneers had just one player, punter Bradley Pinion, left on the reserve/COVID-19 list as of Tuesday.

The Buccaneers made a flurry of roster moves and announcements on Saturday in the hours before their plane departed for New Jersey. First, the team announced that Head Coach Bruce Arians and Wide Receivers Coach Kevin Garver, who had been isolating at home due to positive COVID tests for most of the week, were returning to their posts and would coach at the game on Sunday. Cornerbacks Jamel Dean and Sean Murphy-Bunting were also activated from the reserve/COVID-19 list but were not allowed to travel with the team on Saturday. Finally, the team elevated four players from the practice squad to make them available to play against the Jets: RB Kenjon Barner, WR Cyril Grayson, P Sterling Hofrichter and OLB Elijah Ponder.