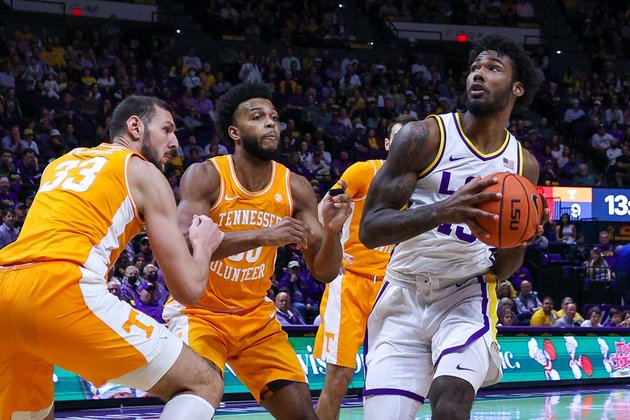 LSU faced ranked teams in each of its first three Southeastern Conference games.

The Tigers held off the Volunteers despite losing Xavier Pinson to a knee injury. Pinson's right knee bent awkwardly during a slip, and the starting point guard had to be helped to the locker room. However, the injury was diagnosed as just an MCL sprain and bone bruise, and Pinson was listed as day-to-day.

"It was the best-case scenario," coach Will Wade said of the diagnosis on Monday.

Pinson is the Tigers' third-leading scorer (10.9 points per game) and leader in assists (4.7 per game).

Eric Gaines, who had a key steal and assist and made four free throws in the final minute against Tennessee, likely would replace Pinson in the starting lineup if Pinson can't play against the Gators.

Tari Eason led the Tigers with a career-high 24 points and 12 rebounds against the Volunteers. Darius Days scored 15 points, and Brandon Murray had 13.

"Our offense looked as good as it has in a long time," Wade said. "We're capable of that. Tremendous effort all night. I thought we got off to a great start; we got off to a better start to start the second half."

Florida trailed by as many as 13 points early at then-No. 9 Auburn on Saturday, but the Gators battled back to get within one point with more than eight minutes remaining.

"We were right there within striking distance after a rocky start," Gators coach Mike White said.

However, Florida couldn't get over the hump in an 85-73 loss, starting 0-2 in the SEC for the first time since the 2009-10 season. The Gators have lost five of their past eight games.

"At halftime (Saturday), we said we had to stay solid and keep the momentum," said forward Anthony Duruji, who scored 14 points. "We wanted to make simple plays and simple reads and not let them score in transition. We didn't turn the ball over that much and got some open shots. We've got to continue to grow and get better and embrace the process."

The Gators, who lost to then-No. 15 Alabama in their league opener, outscored Auburn 21-2 in second-chance points and scored 22 points off 16 turnovers, but they couldn't overcome Auburn's 53.6 percent shooting from the floor.

"I thought we were pretty good," White said. "I think Auburn would have beaten 99 percent of the teams in college basketball the way they shot the ball. They hit some late-clock daggers, some contested jumpers, some other contested mid-clock (shots) and just executed really well.

"Sometimes, it's a make-or-miss game. I hate to give the cop-out, but they shot it well. We've got to shoot it better."