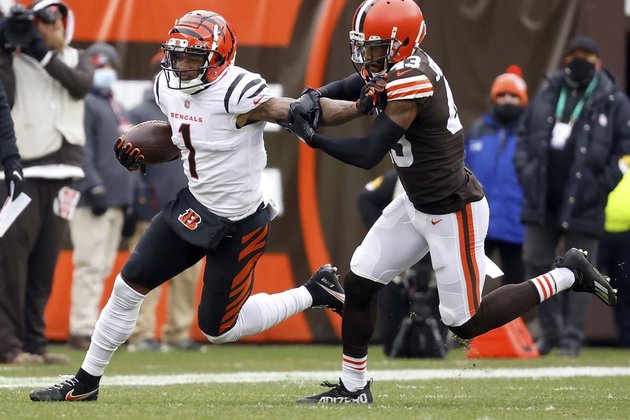 The record fittingly came on yards after catch after one of the NFL's most spectacular seasons catching the ball.

And it seemed like the record Ja'Marr Chase really wanted in a take-your-pick-record-breaking season.

There had been his LSU buddy Justin Jefferson's post-merger rookie record of 1,400 yards set last year and the 42-year-old rookie record for yards in a game. He crushed both with last Sunday's already iconic 266 yards in the AFC North clincher over Kansas City.

But it seemed like what he really wanted was Chad Johnson's Bengals season record for receiving yards he set 14 years ago when Chase was a New Orleans second-grader. And on a day he sat nearly every starting skill player but Chase, head coach Zac Taylor gave him the shot in Sunday's regular-season finale in Cleveland. A 21-16 loss that was a tuneup for the playoffs along with one record-breaker.

"He didn't for one second bring it up. I brought it up to him," Taylor said in Sunday's postgame that was really his first interview of the playoffs. "I told him what the plan was for him. He was just appreciative, but again he didn't lobby for one second. I think if he was told you're out, you're not playing, like TB ((Tyler Boyd) and Tee (Higgins), he would have been completely comfortable with that. He would just try to break it another year."

The only thing he lobbied for Sunday was for tight end C.J. Uzomah to give him back his chain that he wears around his neck.

But in a very un-Chad-like move, he didn't lobby for the ball even though it sounded like Chase had the number written on his preseason goals sheet he stuck on his mirror.

Not a sound. That's probably why Taylor let Chase go for it.

"We just appreciate how he has gone about his business and the relationship he's had with his teammates and coaches has been superb," Taylor said.

And in a very Ocho move, when he arrived with the fifth pick back in April, he vowed to break all the records.

"It is just saying that I can do anything I put my mind to. I came into this season trying to do exactly that and I achieved a lot of things I wanted to do this year. I still have a lot more to do. Hopefully I can break some playoff records."

The record didn't come on one of those sweet bombs from Joe Burrow, his partner in rhyme. It came on a wide receiver screen flipped from backup quarterback Brandon Allen and sprung on a block by backup wide receiver Stanley Morgan, Jr., a special teams maven, with Boyd and Higgins on the bench.

Chase did the rest, spinning out of a tackle by cornerback John Johnson III, getting all 24 record-breaking yards after the catch to give him 1,455 yards, 15 more than the Ocho's 2007 total

Why not? According to Pro Football Reference, only Cooper Kupp and Deebo Samuel have more yards after catch this season.

"Zac (told me earlier in the week that we are not trying to force anything to Ja'Marr and to go where the coverage takes it," Allen said. "If it gets to Ja'Marr naturally, then it does. I do not think it affected anything. He does a great job getting himself open and just being the mismatch that he is. I think we had a couple of plays designed that could get him the ball. I think I was able to get him the ball pretty quickly, and he does the rest from there."

That was on the first play of the second series and Chase stayed in for one more snap. Allen tried to get him on a sideline route, but it was overthrown and Chase was summoned to the other sideline even though he was 19 yards away from breaking the all-time rookie record, set ten years before the 1970 merger in the first year of the AFL by Houston's Bill Groman.

Both Chase and Taylor knew about Groman and it had been discussed. But Taylor was looking at himself in the mirror and he saw the playoffs and not records.

"I told him he was going to have to put himself pretty close to be in a position to get another play there. It just wasn't quite there," Taylor said. "Sometimes you can get down that hole of trying to force something and disrupt it. Those were plays we were going to call early in the game anyway. We just put Ja'Marr in there. He didn't have to be the target on those plays. He just happened to be the guy that was open."

Chase, as he has all year, got it.

"I was aware of it, but I did not get to go for that,' Chase said. "It is cool, though. I still got a chance to go for Ochocinco's record."

That seems to be the one he wanted all along.